Did you know that an RAF base, which was famously home to the Dambusters, was also previously occupied by the Romans?

Well a former Reverend from Coningsby certainly believed so… END_OF_DOCUMENT_TOKEN_TO_BE_REPLACED

If you missed the open afternoon at the quarry last December, there’s a second chance to find out about the archaeological dig hosted by Alan Stephenson, Operations Manager at the Woodhall Spa Quarry. Lydia Hendry, Community Archaeologist, Heritage Lincolnshire, who took us round the site last time, will be giving a free talk to update progress, at the Coningsby Community Hall on April 23rd, at 6.30pm.

On a fine day in December last year, Kirkby on Bain Parish Councillors were invited by Alan Stephenson, Quarry Operations Manager at the Woodhall Spa Quarry, to attend an open afternoon following the recent discovery by local archaeologists of a Roman settlement.  It was a fascinating event, led by Lydia Hendry, Community Archaeologist, Heritage Lincolnshire, and her team. She took us round the site in small groups and explained what they had found so far, demystifying numerous trenches, artifacts and data.

I understand that there will be another opportunity to discover more secrets of this ancient settlement, later this year. Lydia has very kindly written an account of the December event for us:

Tattershall Castle and Gunby Hall are currently both offering interesting events within easy traveling distance of Kirkby on Bain over the next few weeks.

At Lord Cromwell’s Castle in Tattershall this Wednesday (July 13) outdoor theatre company The Lord Chamberlain’s Men return with their outdoor performance of Much Ado About Nothing, and there’s a Wars of the Roses weekend on July 30 and 31: “Travel back in time to the fifteenth century and immerse yourself in our medieval experience. Witness what everyday life was like over 500 years ago with living history tents, talks and displays.”

Gunby Hall gardens are always worth a visit at this time of year, and they are the inspiration for Gunby’s first contemporary art exhibition called ‘Densen – Disperse’, featuring the work of Christiane Löhr. END_OF_DOCUMENT_TOKEN_TO_BE_REPLACED

Heritage Lincolnshire are offering a free short course in Louth to help you learn how you can find out more about the history and archaeology that survives on your doorstep.

This short course is designed for anyone with an interest in history, archaeology or the towns and villages of Lincolnshire. END_OF_DOCUMENT_TOKEN_TO_BE_REPLACED

We aim to reflect the life and times of this Lincolnshire village and to give members of our community opportunities to have a public voice.
LOCAL EVENTS 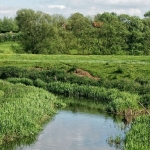